So I mentioned a while back that our church was given a old Methodist church set
deep into Fountain Square.  The church doesn't have air conditioning which we
survived, and as of early December doesn't have heat either.  Not long after
the boiler was turned on, something happened and some necessary equipment
inside the boiler melted leaving the boiler unfixable(??) and our congregation
without heat.  Our winter thus far has been mild and so we survived a couple
of Sundays wearing our coats and mittens.  Then we met in our fellowship area
with the help of space heaters.  Christmas was coming.  Our third annual
Nottada was scheduled for a Sunday evening a week before the big day.  The
Nottada is a feast of both traditional and non traditional Christmas music that was
super awesome last year.  I had been looking forward to it, but now our church
didn't have heat and it was announced that it would take place down in the dull,
damp basement. On top of that, our pastor had taken a couple of weeks off and
regular attenders had been out due to the holidays, new babies and sick babies.
It felt as if our little church was lacking a bit of steam and energy, and I
was concerned it would be seen in the Nottada. D'arcy was asked to sing again, and
she selected the song "Do you hear what I hear".  We practiced all week
attempting to get her confident with four verses.  On Saturday, Stephen and I
went to a concert in Cincinnatti, leaving everyone to spend the night with Grammy
and Poppy.  When we showed up in the morning, D'arcy complained of a sore
throat plus she had a low grade fever.  It was, as expected, strep throat.
D'arcy gets this twice a year.  If there is a remote chance it's strep
with her, it is.  So we took her to the minute clinic at CVS, got her tested
and picked up her pink medicine.  I asked her if she still wanted to sing.
She adamantly said yes. I hate these decisions.  I didn't want to
get anybody else sick in the process, but after conferring with the music director
etc we decided to let her sing. We were early to church for maybe the second time
in our lives and were lead downstairs to the dull, damp basement that had been
completely redone...painted...decorated with beautiful branches and falling
snowflakes.  Lights were strung all around, and oranges were everywhere.
It was simple and beautiful and obviously required loads of energy.  It
blessed my soul.  There were sweet little programs showing the thought and
effort put into the music we would enjoy.  The room was warm and bright, and
soon was full of food and people.  People from the neighborhood.  People
with new babies.  People that we love.  The oranges, I discovered were
filled with votives that once lit, we set in front of a map of Indianapolis to
represent our prayers that truth would permeate our city.  It was beautiful.
And my lovely daughter was able to sing again, an opportunity I know she
wouldn't have at other churches.   I felt overwhelmingly blessed to attend a
church that isn't deterred from meeting because of a silly broken boiler and for
serving a God who met us in a not so dull basement room. 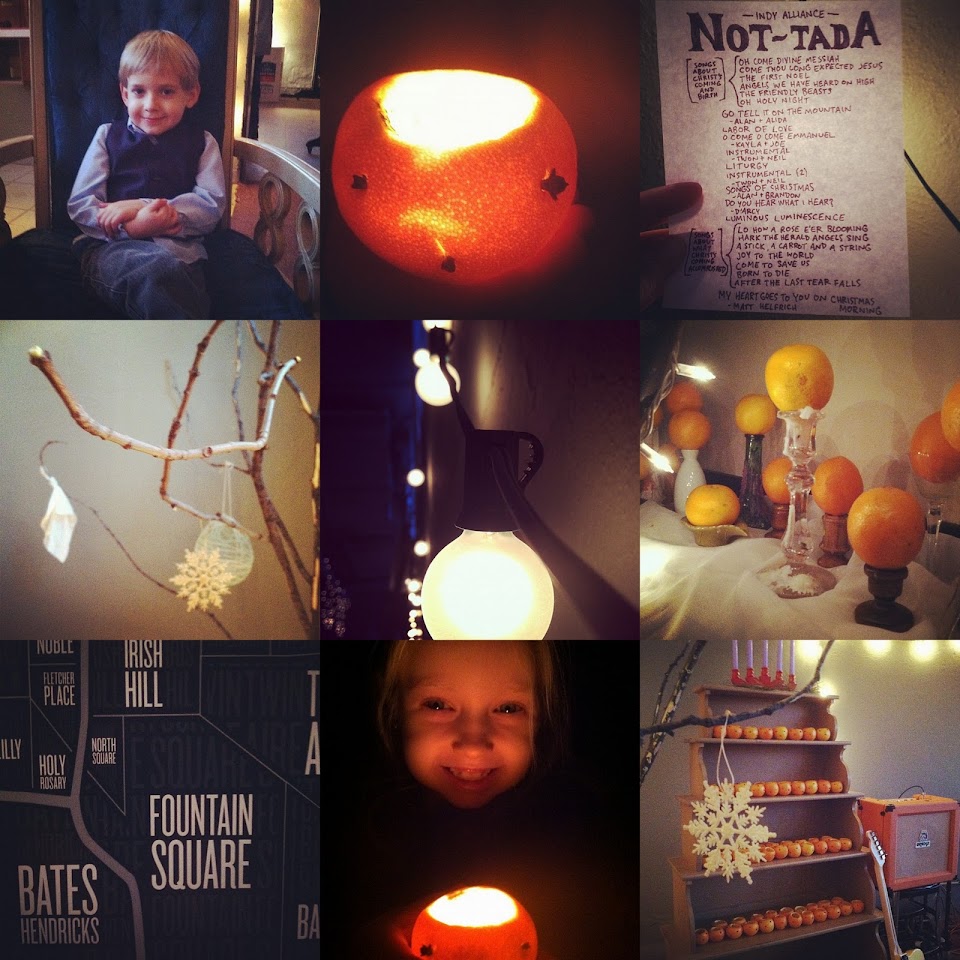