I was just thinking this morning about a family in Indiana who have five girls. They had a dress that they put each girl in and took a picture. It was kind of a fun way to see the differences in each girl. In that moment, I was sad that I hadn't taken a picture of each kid in the little Led Zepplin newborn onesie we bought originally for D'arcy. Sigh. However, I recently took a picture of Schroeder in my kids' favorite apparatus, the Johnny Jumper. My cousin Jenny gave this thing to me before D'arcy was born, and it has gotten lots and lots of use over the years. Julian spent so much time in this thing that even when he was being held, he would bounce up and down.
I spend lots of time comparing my kids. D'arcy had blonder hair, Julian lost all of his hair, and Schroeder's is kinda red. D'arcy had a ghetto booty (just look at those legs) while Julian and Schroeder are like their Daddy, their legs and their backs connect without really much in between. D'arcy and Schroeder have the same "pointy" ears, and Julian's are just sort of BIG. They all have those blue eyes, though. Their are so many blue eyes in our family that we've started analyzing the shades of blue. Schroeder's are the deepest, Julians are smokey. They remind me of pottery from the Smokey Mountains that have the blue and brown colors melded together. Me and the dog are pretty much the only ones not in the blue eyes club. Not that I'm complaining. I think I told my friend Laura in college that I was marrying Stephen so that I could have a bunch of blue eyed, blond haired babies. I guess God was listening to our conversation. 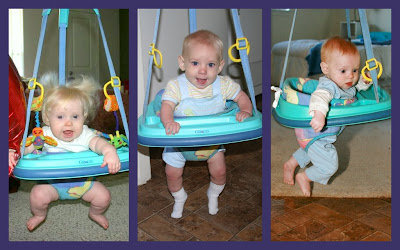