This is my first "Tips for Tuesdays" which I'm doing in conjunction with my friend Carrie @ fedbybottles.blogspot.com. Okay, I'm posting this on Monday night, but tomorrow D'arcy has an allergist appointment and won't get around to it. So, here is my tip for the week.
I breastfeed my babies so even though they don't sleep through the night at an early age (my first two didn't until 6 months) they are still sleeping all night. Which means that they are only awake during their efficient middle of the night feeding which lasts approximately fifteen minutes. I very rarely have to spend time and energy getting my kids to sleep. A lot of moms spend countless hours rocking, bouncing, singing, or nursing their kids to sleep, and once the kid finally gives up, the parent has to somehow get the kid in their bed without waking them. All moms and dads will no what I'm talking about.
I can forgo all this difficulty. My kids are awake when placed in their beds, and typically fall asleep within ten minutes without screaming. So what's my secret? When I put my infant (0-6 mos) to bed, they are swaddled. The theory of swaddling is that the baby isn't able to move his extremities easily (most importantly his arms) so that he will go to sleep easier and won't wake himself up when his arms inevitably flinch.

Our Method.
We use the extremely unsophisticated method that we like to call "the burrito baby swaddling method". Forget those flimsy receiving blankets we all have to many of, this method requires a bigger, sturdier blanket. It doesn't matter how tight you wrap the baby in those light receiving blankets...once they are about three days old, they'll get themselves out. Here are two of the blankets I have used to swaddle Julian and Schroeder. 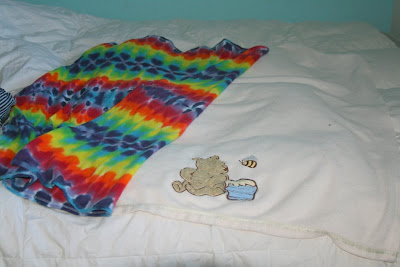 To create your own burrito baby, simply lay out a blanket and fold it so that it is no longer than the height of the babies body. Lay the baby about a third of the way into the blanket. This is the crucial step, take the third of the blanket to the left and wrap it tightly around the baby's body. I tuck the end of the blanket under the baby's left arm. It needs to be tight enough so the baby cannot easily get himself out of the swaddle. Then...ROLL. Obviously, you will need to be on a soft surface, either a bed or a soft carpet. However, my babies have never freaked out during the rolling process. Now you have a well swaddled baby who will feel snug as a bug in a rug, and when this happens your baby will fall asleep easier and stay asleep. 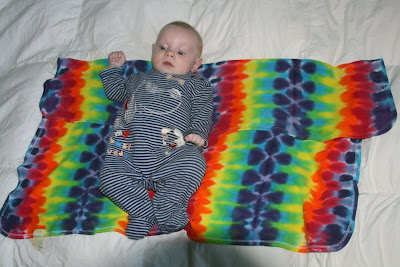 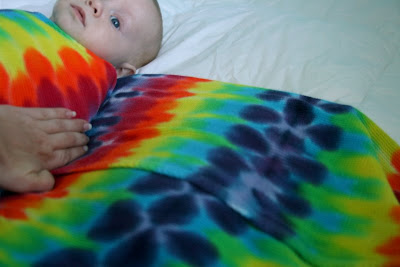 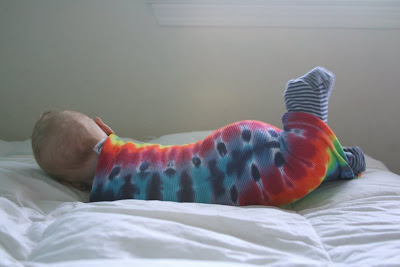 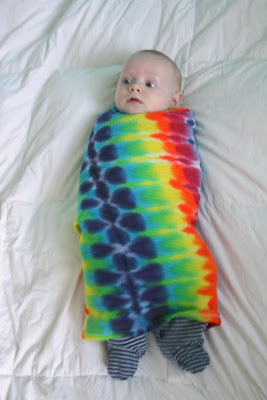 Twenty minutes ago, Schroeder was playing. I knew he would be sleepy and ready for his afternoon nap so I burrito-ed him, put him in his co-sleeper, give him his pacifier and within five minutes he was asleep, and he'll stay that way for two and a half hours.
Stephen and I have been using this technique since our first son, Julian, was about three weeks old. I had nursed him one night, and was trying to set him back in his co-sleeper without him waking up. I was beyond frustrated. Stephen woke up to help, and decided to swaddle him. At three in the morning, he abandoned all the complicated swaddling techniques and went for the simplest possible way. Julian immediately laid down in his bassinet fell asleep. It was very liberating!
Let me know if any of you have experienced the benefits of swaddling.