Stephen merged the two names we have picked out for this baby and decided to call our unborn baby Penuly. If it's a girl, she will most likely be named Etta Penelope May Williams. She will go by Penelope (and I might allow Penny). If it's a boy, he will most likely be named Emmett Ulysses (to be determined) Williams. He will go by Ulysses or Uly. Both first names come from Stephen's dad, Emmett.

Ulysses is a name we picked out together when we were expecting Maggie Lu. We were laying in bed throwing out boy names. I wanted to have some sort of boy name I liked before we went for our ultrasound. I was so afraid that I would cry if they told me I was having my third boy in a row. Stephen was throwing out name after ridiculous name, and I was scoffing. I was throwing out awesome names like Ephraim and Jonas and he was downright vetoing them. Then he suggested Ulysses, and I paused and realized how much I like it. And that was that.

We don't have a third name yet for a boy. We are throwing around the idea of Bucky or Buck. When we have asked Julian what he wanted to name a baby boy for the last several years, he would always get this big smile and sparkle in his eye and respond firmly "Bucky". That smile and sparkle have turned what would otherwise be a ridiculous name into something beautiful. And let's face it, this baby will most likely never use their third name anyway. Plus, we've already given one child Edith as a third name and another Vonnegut. Can it get sillier?

For the last couple of years, I was hesitant to even come up with another girl name. I really, really liked Ulysses and was, for the first time, rooting for a baby boy. The problem is, we don't necessarily get to pick and a baby girl might emerge in May and demand a name. So we started talking about girl names. We had a couple that we had both liked in the past, Gwendolyn and Genevieve, that just didn't seem right anymore. I loved, loved, loved the name Georgia, but that was vetoed. One night, when our small group was wrapping up, we started talking about girl names with our friend Beka. Stephen discovered that Penelope was the name of Odysseus's wife in the Odyssey. (Ulysses is the Roman or Latin version of the name Odysseus.) I sort of nodded and said that I liked it. That meant to me that we could put it on our short list. Then he shouted and slapped his knee, "That's it! We have a girls name." Ummmm....wait please! I need to think about this a second! Stephen is kind of a decide and move on kind of guy. He doesn't dwell on past decisions and fret if he made the right one. It's a fairly good quality about him, in my opinion. I had moved too slow! If I had downright rejected the idea he could have found something else, but my initial acceptance of the name sealed it in his mind. So now we have a baby Penuly.

May is the month that Stephen and I are born in (we share a birthday), the month we got engaged, and the month we married. It will also be (assuming everything goes as planned) the month the baby will be born....even if I'm two weeks late!

My friend Joy sent me a onesie for Penuly. We have all the baby essentials. Boy and girl clothes, a swing, bumbo seat, carseat, stroller, blankets, pack n' play, etc, etc, etc. This baby won't be lacking on stuff. It is nice to get a few things just for THIS baby, though. That's why receiving this little "Thing 5" onesie was so special. 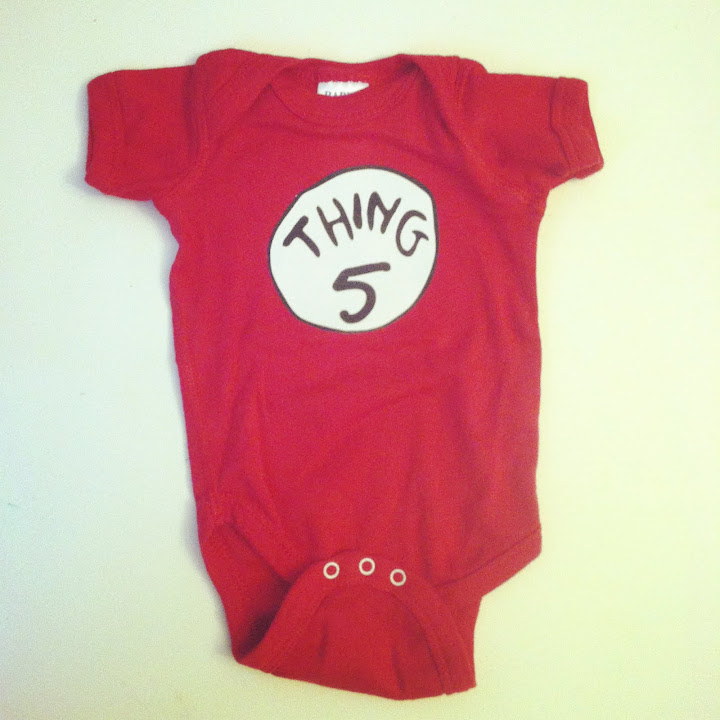 I'm planning on just decorating a little corner of our room for Penuly. I'm going to indulge myself and buy a new crib. Crib styles have advanced so much since we last bought one seven years ago. Oh, and I guess the movable sides are considered dangerous now. Since both Penelope and Ulysses conjure up images of the sea for me, I'm hoping to decorate the space above Penuly's crib with sea images from a local artist, Sally Harless. You can see what I've pinned to my little pinterest board here. We went to a local show called Optical Popsicle in October and they had a huge shiny silver whale as a prop. I might have to make a much smaller version to hang above Penuly's bed.

We are scheduled for an unltrasound on December 3rd. Stephen and I will not be finding out the sex of the baby, but we will be having it written down and put into a little envelope. Whoever would like to see it is welcome, they just have to do their best to play with our minds. We know there is a good chance we'll know what the sex is by the time the baby comes simply because someone might slip. It really doesn't matter to me.

I just feel like going against the grain...being nonchalant and almost sacreligious with this information. So many people keep the names and sex a secret. We are only going to keep it secret from ourselves. And we know many of you will dislike or even abhore our name choices, but we love them and will not change our minds. Plus, there is a good chance we didn't like the names you picked for your kids.