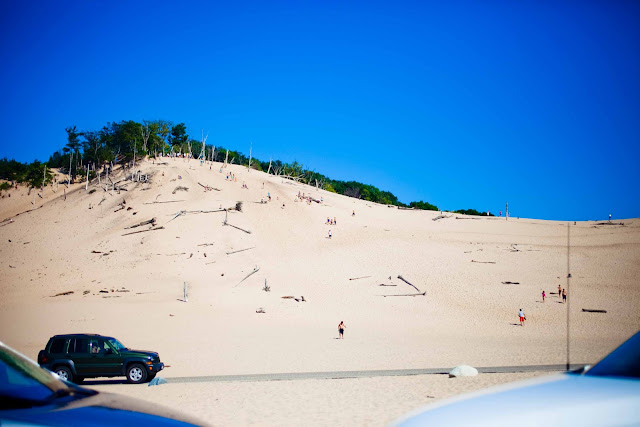 One of the things I most love about my eldest daughter is her fearlessness. She just goes for things. Examples include:
+the time she let someone hook her up to this bungy big bounce thing and learned to flip in a mere three minutes. The bungy man said he'd never seen someone her size do so many.
+the first time she went ice skating and was skating on her own in record time.
+last Christmas when she went up and sang Silent Night solo in front of our church.
+last Christmas when she put on a Garfield mask and sang solo in her Christmas program.
+every time we go to the pool and she just flips right into the water.

Her fearlessness turned into pure recklessness when we decided to climb this thing last week. We were with a group of family. There were probably about 20 of us. My kids sans Maggie Lu went up with the group. I was at the back of the pack. I'm blaming that on short legs and delivering four babies in the last seven years. The first thing I said when I caught my breath at the top was "Where is D'arcy?" Everyone, including my husband (her father :)) said, "She was just right here."

Yeah...well, where is she now?

It became clear that she was sharing her desire to run down the dune, and everyone was telling her to stay put until the group was ready. So we looked down the dune to see if she had done just that, but we didn't see her. It didn't help that we were facing into the sun.

It also didn't help that another family was screaming for their lost daughter. They seemed very panicked and were looking for her down the steep, wooded terrain behind the dune. Their panic rubbed off a bit.

I had just been telling my aunt who was with me at the back of the pack (keep in mind she has short legs and has delivered five babies) that the strongest memory I have of this place was when we came in the 80s and Kyle (my brother) fell of the back. He was there one minute and gone the next. It still makes my sister and I laugh. But we called his name and he answered back.

D'arcy wasn't answering. My heart started beating a little faster and some of my cousins who were at the front of the pack were tasked with running here and there to look for her. My uncle told one of them to go get the ranger. No parent ever wants a ranger to have to look for their child.

And, of course, we found her (before the ranger came around). She couldn't help herself and took off running down the dune. She said she was halfway across the parking lot towards the beach and decided she should probably come back and sit by my aunt who was sitting at the bottom of the dune. At least I know she has a voice of reason, even if it seems to be five minutes behind the voice of fearless adventure.

I guess my job is to help her hear that voice a bit sooner and know when to listen to it.