Maggie is a fourth child. That is why I haven't updated you on her life progress in several months. That might also be why she was thirteen pounds at her last checkup instead of sixteen like D'arcy was at her age. I told the doctor I didn't think I was doing anything differently. I'm nursing her at the same intervals. The doctor reminded me that I have three other children at home. Yeah, I guess I never nursed D'arcy while a one year old was trying to scale me from the front, from the back, from the side. It's ok, Maggie is fine with three thigh rolls instead of six. Just in case, though, I am still feeding her once at night and lots of cereal mixed with formula. 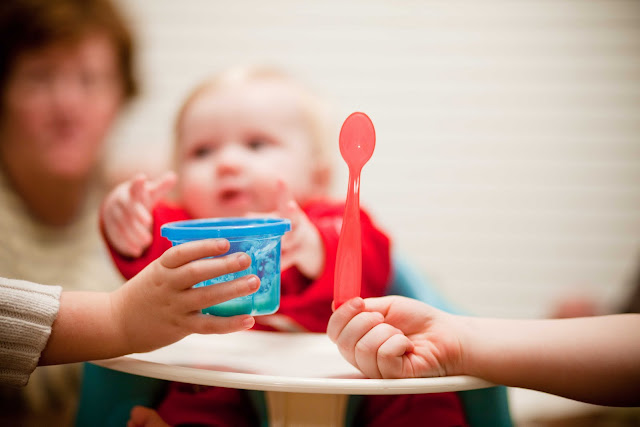 She is doing all the normal things, pooping, crying, smiling, rolling over, grabbing her feet, pseudo sitting up. I like to call our babies little stroke victims. No offense intended. They just don't know how to use their hands properly. They overreach and can't grab causing things to knock over. She's recovering from her stroke of infancy very well, though, and is already an expert at popping her pacifier in and out of her mouth. 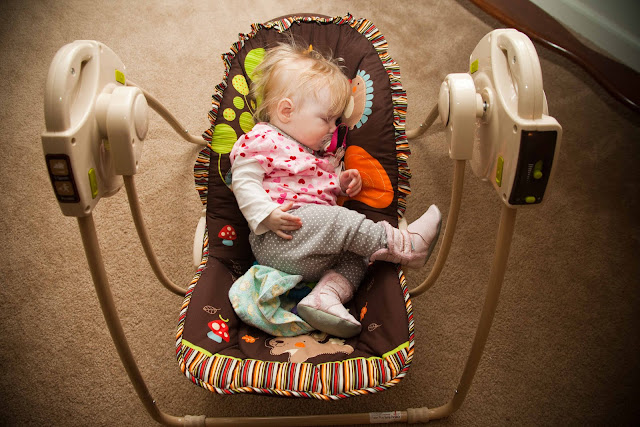 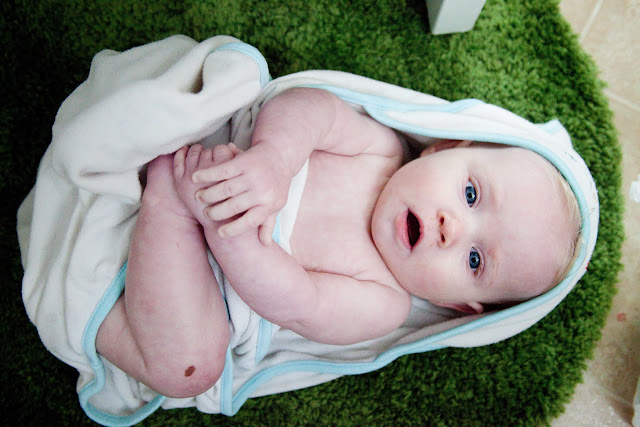 We are still living at our in laws and for lack of room, she is sleeping in our walk in closet. All was well until she started rolling over. This caused us to stop swaddling. This caused her to cry at night which made mommy want to shake her. This caused Daddy to wake up in spite of his deafness in one ear. So you see that both of us were at our wits end. It was hard to let her cry it out even for ten minutes because she was right there in our room. So, I cleaned out the closet, popped up the pack n play. Now we all get plenty of sleep.

I'm spending lots of moments holding her trying to remember her at this tiny age. She's been grabbing my face with her little hands and giving me sweet open mouthed kisses. My mom said once that she doesn't laugh much, but she always seems amused. This is true. She is just a little, dainty, sweet thing with lots of stick straight blond hair. It's much more tame than a couple of months ago, but now is suffering from winter dryness. My sister said her hair looks like Christopher Lloyd's. Now it gets conditioned. 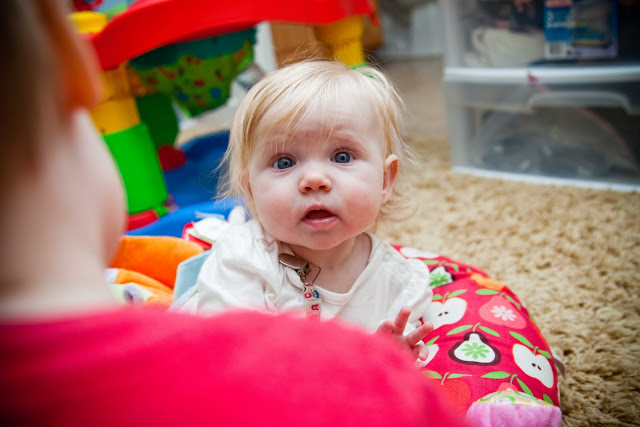 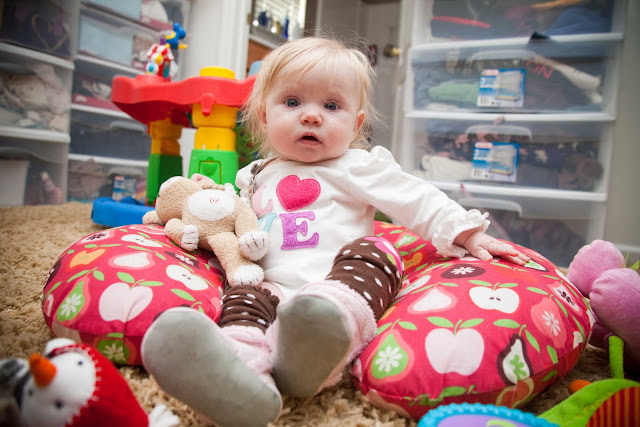 Her siblings love her. We are trying to convince D'arcy that she isn't her personal, live baby doll. Julian loves giving her kisses on the head. Schroeder calls her baby. "Hey baby"..."Hey baby". He has all good intentions but he can get a little rough. This baby likes me best, though. When someone else is holding her, I can't look at her because if we lock eyes she'll cry until I take her back. I think it's kind of cute, but other people aren't amused. Her daddy finds it annoying. I've never had a baby who was so attached to me. Thankfully, she isn't to the point of throwing a fit if I leave her with a babysitter or in the nursery.

The plan is to take some six months photos in the next week so be on the lookout for more photos of Miss Maggie Lu.