We are saying goodbye to Willow Grove Drive today.

We are closing on the sell of our little house in Texas today. I feel a little out of the loop since we won't actually be there to sign the paperwork and hand over the keys. The house isn't our last piece of connection to Texas as we made lifetime friends who we will never have to sell. The thought of losing this connection to our real first family home made me want to reflect a little.

We moved to Texas about a year and a half after getting married. Stephen had just graduated from college, and D'arcy had just been born. We had this idea of leaving and cleaving. We separated ourselves from everything that was familiar and safe besides each other in an attempt to bind ourselves together in a way that a wedding ceremony or a honeymoon or even a baby couldn't do.

Our relationship was not new. We started dating when we were fifteen and sixteen so by the time we moved to Texas we had already been together for seven years. We were still learning to be independent adults, parents, a wife and a husband, though. All those roles were relatively new.

We chose a church together and found that we both prefer small, charismatic churches with a familial vibe.

We began to make new friends and discovered that we have extremely different ideas on what makes for a good friend. He looked for interesting and I looked for similar. We both realized how extroverted we were. We would never be fine with a quiet weekend at home doing home improvement projects and grocery shopping. We would sit on Friday listing people we should call to hang out with. He would suggest someone and I would cringe and vise versa.

We slowly came to compromises regarding our household roles. I discovered that he didn't mind coming home and cooking a meal as long as I had planned it. This came after lots of frustrating conversations started with, "Hey, what do you want for dinner?" followed by a shrug.

Stephen made it clear before we got married that he wanted our family to be a "eat at the table every night together with real food" kind of family.  This was a departure from how I grew up, but I had been working at making it a habit.  When we moved to Texas we agreed to abandon the use of Chicken Helpers, Tuna Helpers, etc which was seemingly the only thing I could cook when we got married.  Once I figured out that a clove of garlic is not a bulb of garlic and that garlic needs to be properly peeled, my cooking took off.  Not to a Iron Chef level, but to the point that Stephen eventually said that I was a better cook than his mom.

It made sense to us both that I continue to keep track of the finances as long as I didn't get mad and inevitably say, "I feel like I have to be your mom." when I had to ask him to stop spending so much going out to eat or ask him not to buy that item today.

I came to grips with the fact that he has a mental breakdown at even the mention of going to Home Depot. I eventually just decided that if anyone was going to Home Depot it was going to be me. I'm hoping he'll learn from my example that home improvement isn't this skill you come out of the womb with but something you develop from research and trying.

I asked Stephen what he had to come to grips with about me during our time in Texas. He said he learned how to communicate with me. That when he came to me with frustrating or difficult news that he needed to express the news in what I considered a proper emotional tone. If he put a hole in our laminate kitchen flooring while moving the refrigerator or happen to wash D'arcy's new ipod the week after Christmas, he should show his anger at himself and his strong remorse for his mistake. He should NOT deliver the news matter-of-factly with a shrug and a "Shit Happens" attitude. He's hoping I'll still learn to trust that he does experience appropriate emotions without having to prove it to me.

I became aware of my deep need for security, specifically financial. It became clear that I was a miser. I wanted him to step up and support us, giving me the opportunity to stay home with our kids, but I didn't trust that he could keep a job indefinitely. When I finally did quit my job, two months later Stephen's job was downsized. Thankfully he delivered this news with appropriate solemness, and even brought home our pastor to help. We were essentially jobless with two kids for three or four months. Although it was stressful, it was also a time of healing, trust building, and vision setting. Lots of good things came from that time. We simplified and sold our second car. Six years later, we still only live with one vehicle by choice. My little photography company was created. We were prompted to start a two year seminary/leadership school. Most importantly, I began to really know where our sustenance came from, and began to trust Stephen to handle his own work affairs.

We both agree that one of the most wonderful things that came from our time in Texas was a new and different voice on how we could birth our children. I was attracted to the idea of a natural birth, but D'arcy's birth had become a litany of medical interventions that ultimately led, in my opinion, to an unnecessary cesarean section. We knew we wanted a big family. We already had five kids in mind. I wasn't sure if my body could support five cesareans, and I certainly didn't want to recover from five. Texas is a fantastic state to find yourself in if you are contemplating a home delivery with a midwife. Midwives are plentiful and certified. We also discovered many in our church who had birthed at home, our pastors for one. Ultimately, they even let us deliver our Julian in their home since it was closer to the hospital.

It's funny. I'm sitting here exactly 42 weeks pregnant with our fifth baby, the baby we always believed would complete our family. I'm scared about going much further over my due date, but because I go to a midwife, my options for induction aren't quite as simple as when you go to an OB/GYN. I feel this judgement (that may or not be reality) from others that we are a little crazy and potentially putting our child's life in danger. And, yet, I firmly believe that this baby might not have a life if we hadn't made the decision to use a midwife and deliver on what we call our "pastor's hippie birthing bed" almost seven years ago.

So farewell little house on Willow Grove Drive with your wild yard full of snakes and frogs and cactus (cacti?).  We never really became Texans or San Antonians.  We didn't watch the Spurs or set off fireworks on New Years Eve or enjoy the horrible 100 degree weather from June 1 to August 31 (although I do miss March).  I won't miss the scorpians in my shoes and bathtub, or the incredibly long drive from San Antonio to the state border.  Still, you were the place we escaped to and learned to be better adults, parents, a wife and a husband, and I left with lots of great memories.


Here we are the day we bought our house and picked our lot.  D'arcy was about six seven months old. 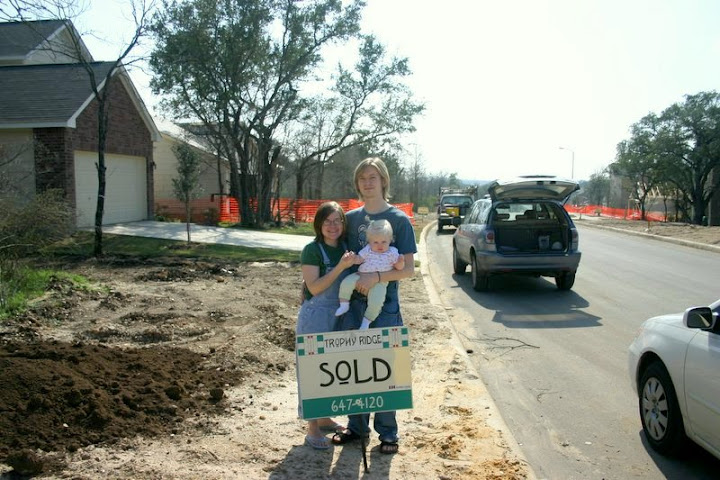 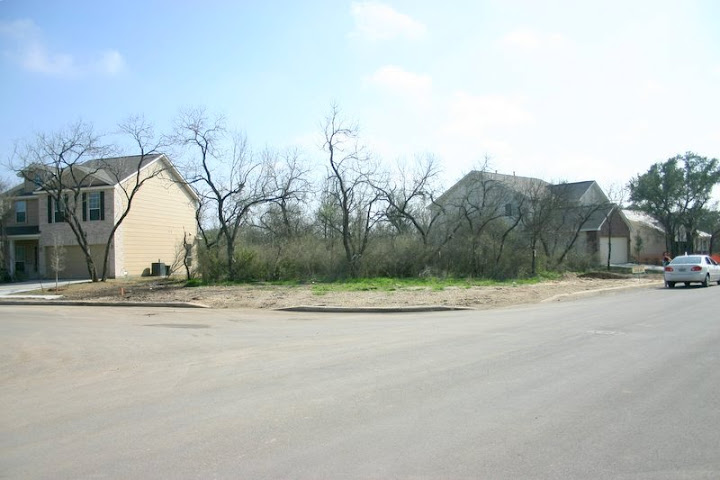 Here is our home the day we moved in. 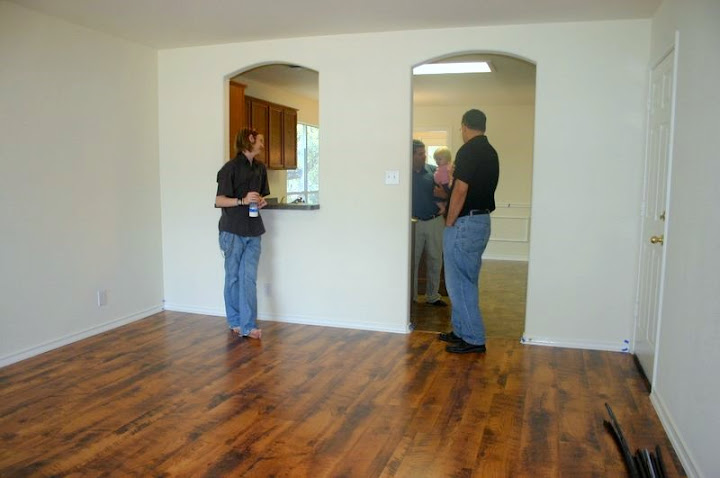 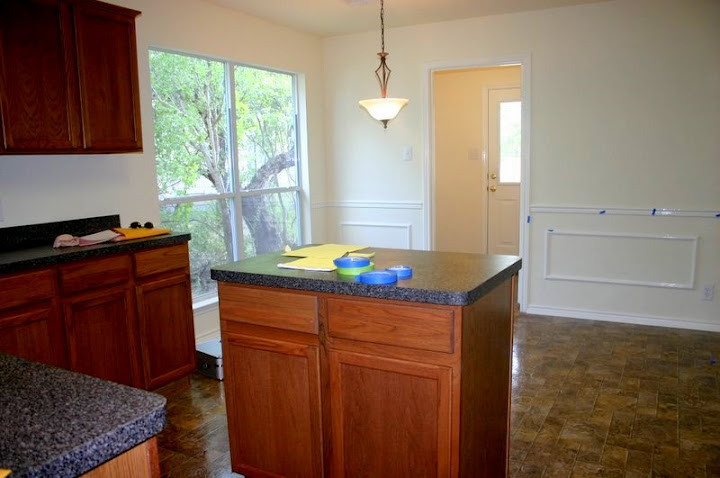 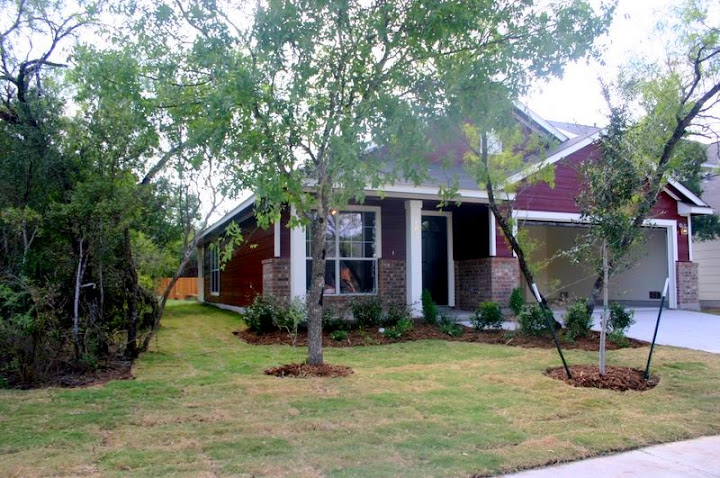 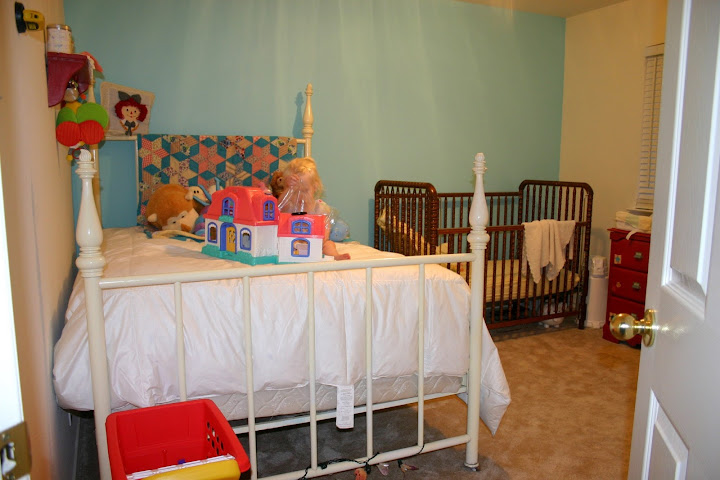 The day we brought Julian home. 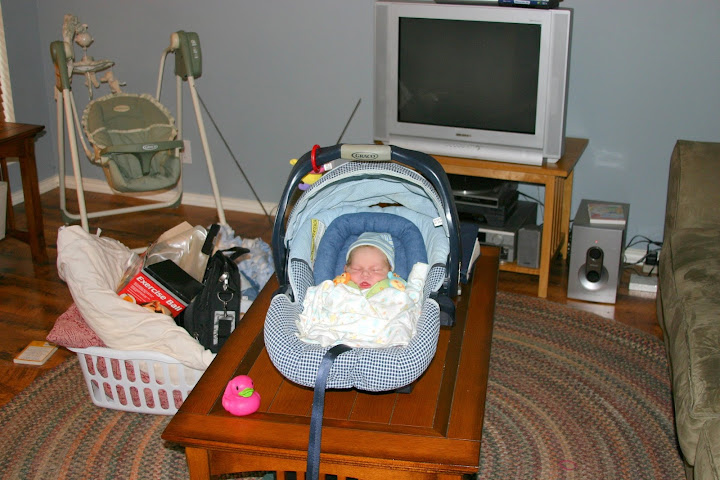 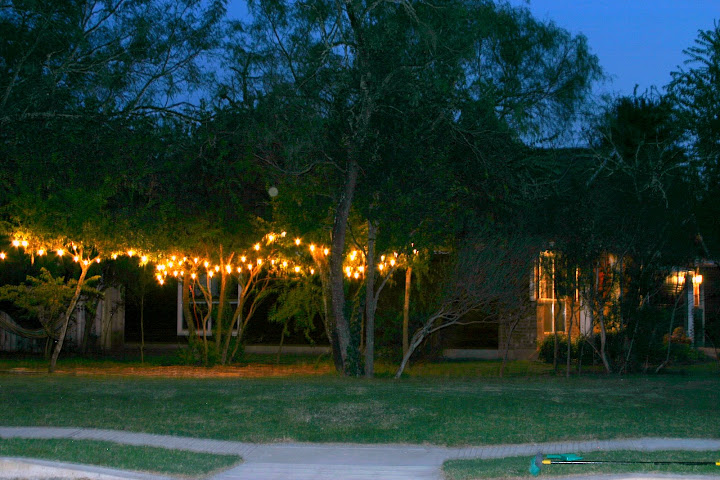 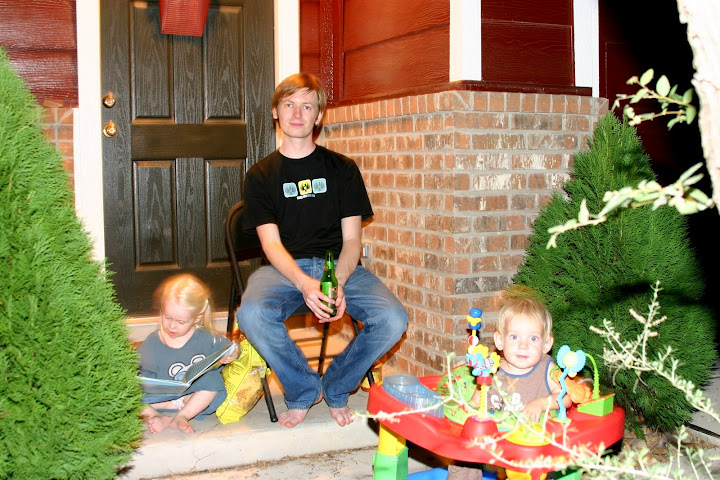 This is the day Schroeder was born in our home. 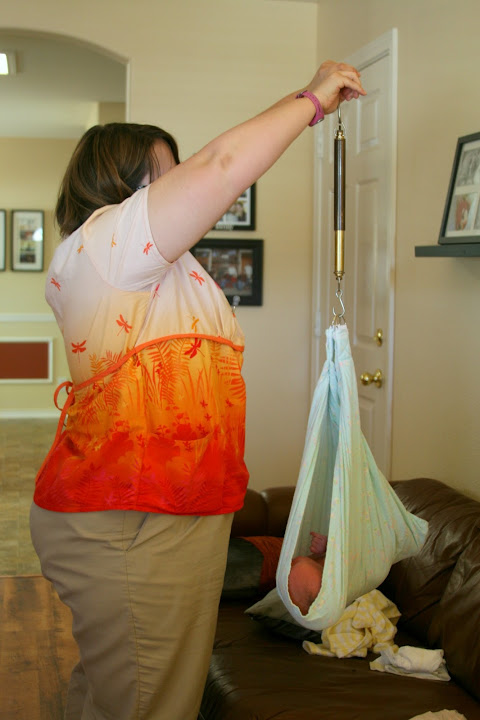 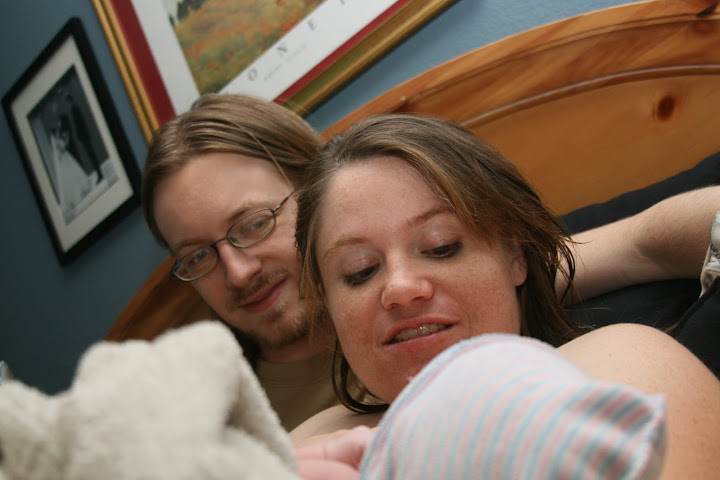 Celebrating Schroeder's first birthday just before we moved back to Indiana. 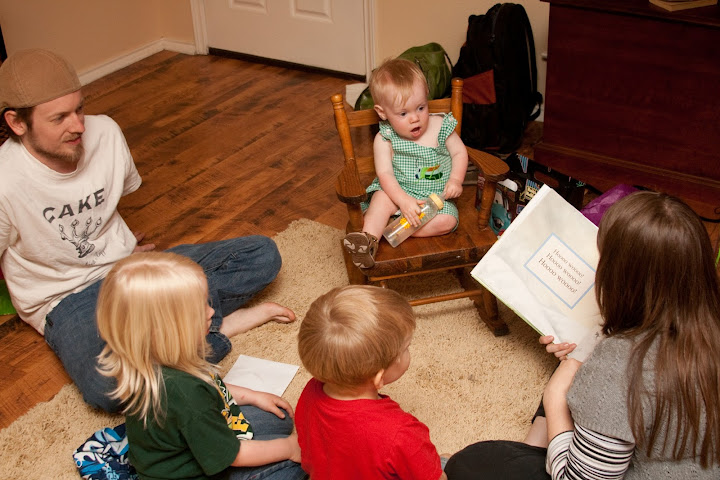 What our house looked like just before we moved. 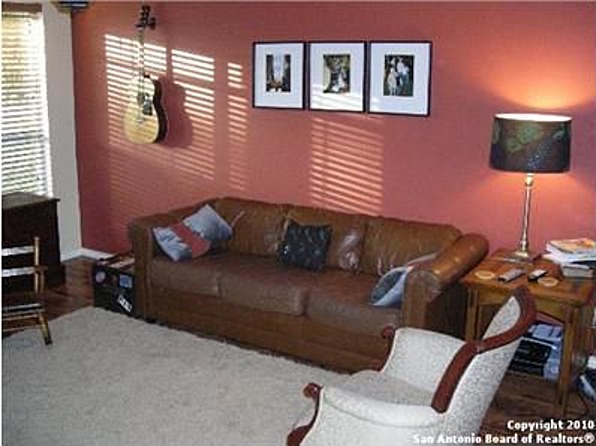 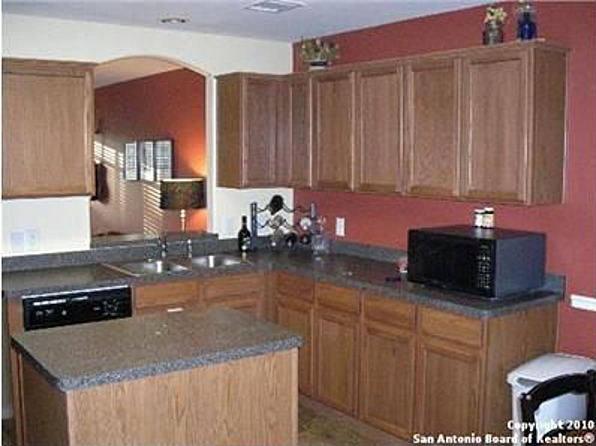 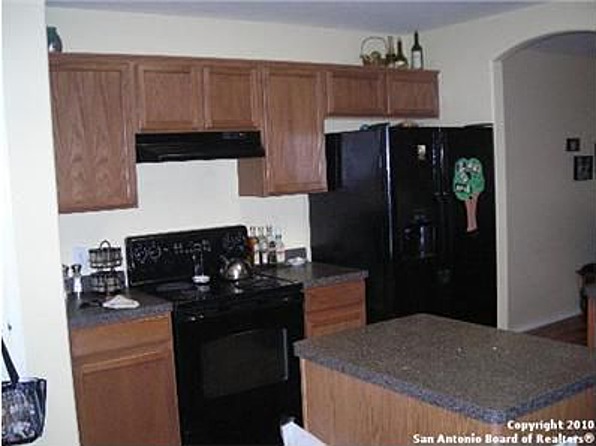 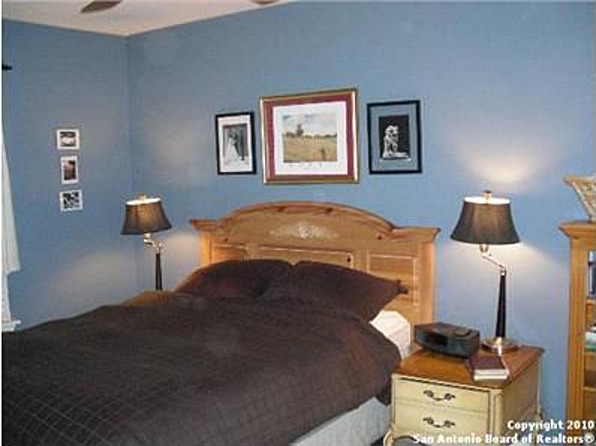 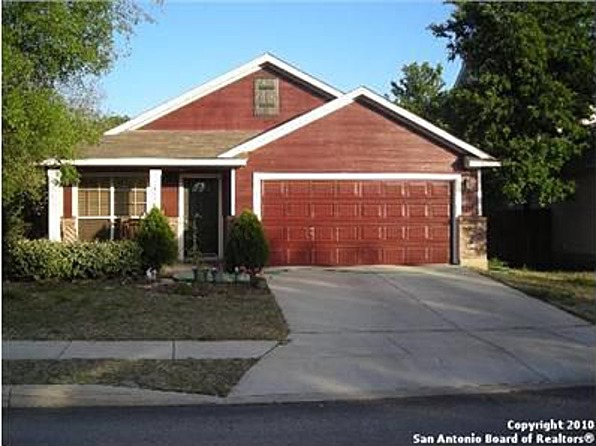 Our family the day before Stephen left for Indiana.  I was six months pregnant with Maggie Lu here. 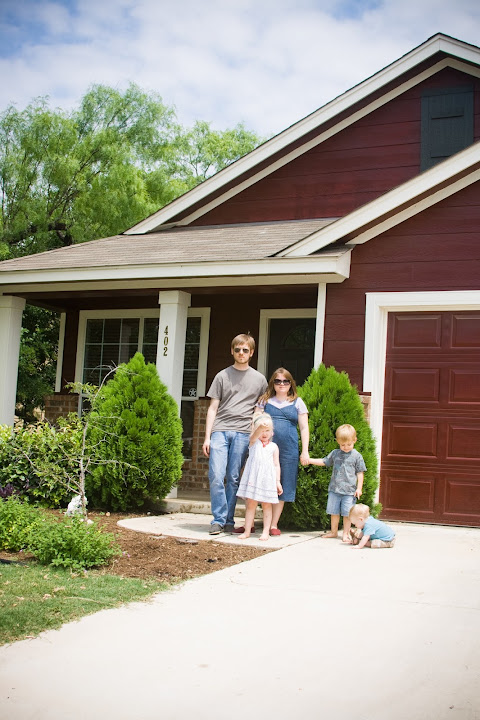