On Friday a thief, on Sunday a King.

Pause for a moment and let that sink in.

I started with something spiritually meaningful before I digress into pictures of Easter outfits, etc.  It's been awhile since I've done a "proper" photo shoot with my kids.  Proper means they are dressed in outfits that I picked, looking as clean as they come, and standing relatively still for me to get more traditional portraits.    My mother-in-law and I had fun working on their outfits together.  I initially had no grand idea that they would be so coordinated.  I saw D'arcy's dress in Target and loved it.  It passed her sparkle test. I found Schroeder's shirt in his closet, a hand me down from my cousin's son.  Who knew that they would blend so well?  Schroeder wasn't the biggest fan of his tie.  He told me he prefers bow ties.  He has one from a couple of Easters ago, and choose to wear it with his pajamas the other night.
Despite this being a "proper" photo shoot, I knew from experience that I had a max of thirty minutes to get what I could before we potentially all dissolved into grumpiness.   It's hard to be the photographer and the mother.  My instinct as a mother is to say, "STAND UP STRAIGHT!", but my experience as a photographer is that photos are best when you goof around with the subject.  All Maggie wanted to do was dance and sing and cheese.  I had to give Schroeder a happy jelly bean pill before he would pose for me at all.  We turned on Gagnam style on my phone at the end.  I love the way Maggie sings, "Hey, sexy lady."
I hate to say that I didn't do much in the way of reading the Easter story to my kids this year.  I did get down the Resurrection Eggs which they spent an afternoon playing with as a group.  A couple of the pieces were initially misplaced and throughout the week a kid would find one and bring it down to me.  One child came down and said, "Hey mom, this goes to the Resolution Eggs."  Another said, "Hey mom, this goes to the Revelation Eggs."  Not altogether inappropriate names.
The first year we moved into this house (2011), I hid an egg per kid in each downstairs room and we had a little hunt.  Sometime in June 2012, Julian and D'arcy demanded to know why I had neglected to do this for that year's Easter.  I told them to remind me at a more appropriate moment as I'm not really planning nine months ahead.  All month they've been letting me know that Easter was approaching.  So I bought three bags of candy (one of which I had to replace because I ate most of it before Easter arrived) and some plastic eggs and we had a little indoor hunt in our house which they all got a big kick out of.  I'm teaching them to appreciate the little things by being a low key (aka lame or lazy) holiday planner. 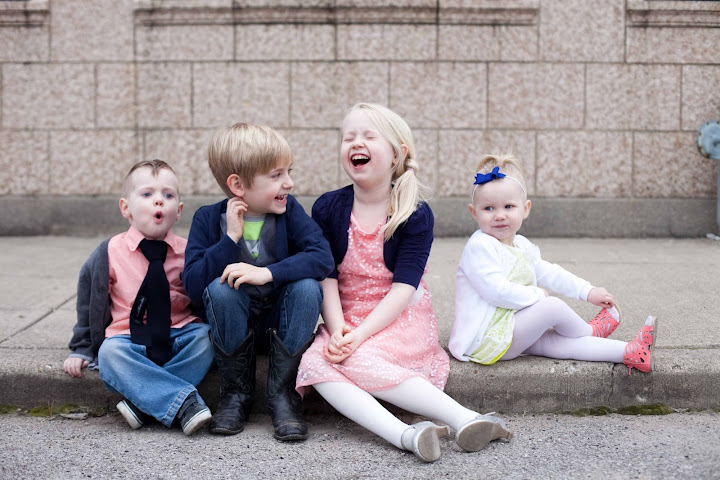