BOMBS! do damage with FIRE!

Julian brought home a science project folder.  Week one we were asked to write down five questions our little scientists had about the world around them.  Knowing me this happened at 6:30 on a Tuesday evening...no 7:30...when Julian's homework is due on Wednesday morning.  He came up with these five questions and I didn't edit him.

What is the earth made of?
How do bombs work?
How do you make a chemical?
How are bananas grown?
Where do zucchinis grow?

The folder demanded of us the next week to narrow the four questions down to two main interests.  Again, I didn't edit Julian, and he choose bananas and bombs.  We came up with several questions for each.

I assumed we would do a research project, and I was fully prepared to force him to do it on bananas.  We would look up information to answer where bananas grow and why they are called bananas.

BUT...the next week we were asked to plan an experiment with a question and a hypothesis.  I felt stumped on how to turn his banana questions into an experiment.  I thought about starting from scratch, but I typed in "easy bomb experiments".  I found directions for a super easy "Plastic bag bomb" that made Julian really excited and totally seemed safe.

All was settled until I got a yellow sticky note on Julian's Friday folder from his teacher asking us to talk about testing "bombs".

I hadn't really considered that he would be presenting this to a classroom of kindergartners   He came home with a sample script for his presentation.  I started to laugh when I inserted what his responses would be.

My name is (Julian).  I'm interested in (BOMBS!).  One question I had about (BOMBS) is (how do bombs do damage)?  I thought (my bomb would do damage with FIRE!).  This was my plan to find an answer to my question:  First I....then I....and it caused (a sandwich bag to blow up and spew water all over the kitchen)....  New questions that came from this experiment are (are there any bombs that would explode and cause FIRE?)

So we kept the experiment, but dumped the word BOMBS! and called it a chemical reaction instead.  Looking back at his initial questions, he did ask about chemicals!  And for your information, the bomb was a little lackluster.  The bag did pop and it did make Julian jump, but the water stayed in the bag and just a small hole was created to let the carbon dioxide escape.  We were certainly NOT thrown against the side of the cabinet from the force of it all.  So, I would recommend it to all you super cool, slightly oblivious parents such as myself.  Here are the instructions  http://www.wikihow.com/Make-a-Sandwich-Bag-Bomb. 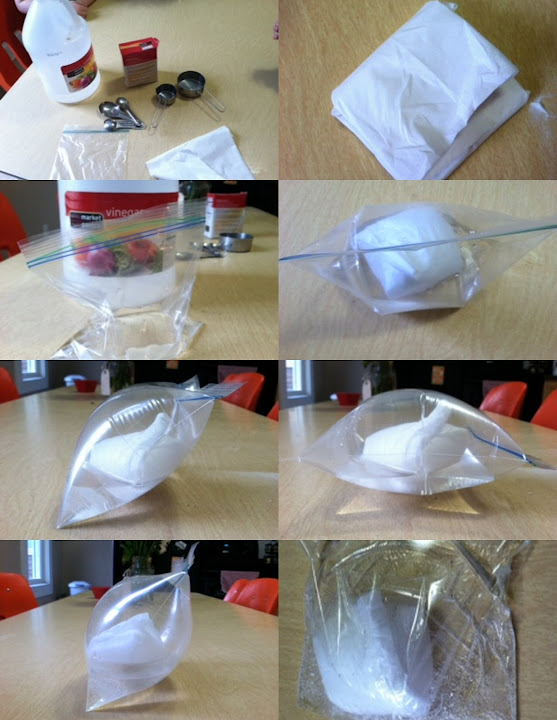