A couple of Saturdays ago, I did what needed to be done. I cut Julian's hair. Stephen would like Julian's hair to be a little shaggy. I don't disagree, but I don't like it to be a mushroom. It's been difficult to find a middle ground. Plus, I cut their hair myself which makes giving him a good longer style even more difficult. It saves money, but mostly, I like to try new things and who else besides your kids will let you experiment on their hair?
I asked Stephen to use his beard trimmers to clean up the neck line. In the midst of Stephen doing a perfectly good job, I grabbed the clippers and tried. Well, I went way too high into his hairline. Everybody needs a good buzz cut once in his life, right, and on this particular Saturday, Julian got his.
The boy had sat really still during his first haircut, but was pretty ancy during the buzzing session. Mostly, he was ready to get it over with and get to the catfish house (aka The Bass Pro Shop). He and his daddy were going on a man date. So he was whinning, and Stephen felt sorry for him so he decided that he, too, would buzz his head.
Now, if you have ever met my husband, you know that his hair is one of his most valued assets. He has to go to a hair stylist and Super Cuts does not count. He must have Crew shampoo and conditioner. Plus, there are pictures of his hair hanging in two salons (and in a hair styling book). But I guess he loves his son more than his hair because at 12am that night, he pulled his hair into a ponytail and just started shearing it off.
We've come to the conclusion that we both like his new look. You can decide for yourselves. 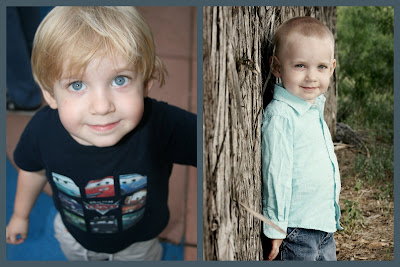 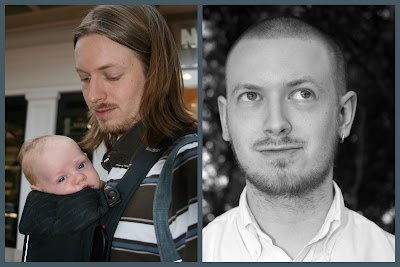 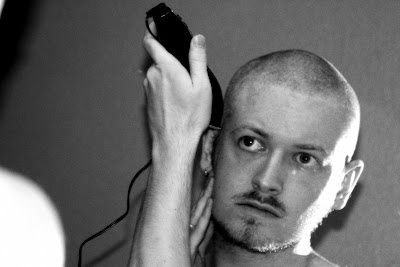 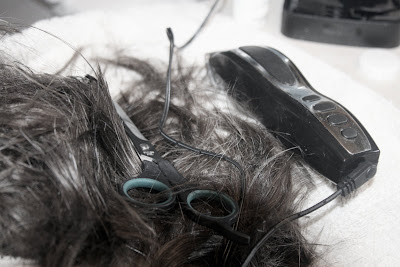