Schroeder turned six at the end of March.  The week before his birthday, I started a little note on my phone and began jotting down little tidbits I wanted to share about him.  Like the fact that after six months of school, all of his pants have holes in the knees.  And if you check his pockets, you will find skylander or pokemon trading cards or a package of leftover graham crackers from afternoon snack.  Before he goes to bed, I have to smell his breath to make sure he brushed his teeth, and I have to make sure he takes his shoes off or he'll just sleep in them leaving gross dark spots on his white sheets.

At school, he has been learning to read and write which he is excited about.  He'll write me cards and stuff them in envelopes.  His name has progressively been getting longer on his work as he learns to write the whole of his name.  Schr.  Schroe.  Schroed.  Schroeder.  I love his name.

There is something about my boys being tender and loving that just melts me.  I'm not sure if it is counter to what we perceive as masculine or if it is simply that most of their time is spent turning items into guns and taking all the enemies down.  But a sweet note, a hug, or sweetness showed to their littlest sister is so dear to me.  I'm glad they get to experience first hand the joy of a baby in the house.

We were at a friend's birthday party the other day, and another dad observed Schroeder hitting the piñata.  He mentioned to Stephen that Schroeder was very athletic.  Stephen wondered if by athletic he meant aggressive?

When we get calls from the school, from the nurse or his teacher, he gets on the phone and literally doesn't say a word.  I have to listen closely for the sound of his breathing to see if he is still connected.  His behavior seems to have improved this semester.  I haven't any discipline calls since January.  The other day, I got a call from the school in the middle of the day and cringed. I picked up the phone and their art teacher said she was calling to discuss some behaviors in the classroom.  She went on to talk about some GOOD behaviors that Schroeder exhibited, and then the whole class yelled how much they liked having him in class.  I started to cry.

I love it when he comes home from school and catches up with Maggie Lu.  They clasp their hand together and have a little talk.  She takes him out to her fairy garden to show him her new setup.  I also hear he and Julian laying in their beds talking about boy stuff, LEGOs and skylanders and minecraft.

The other day, Julian was showing Schroeder a animated video of minecraft characters playing five finger fillet, that game where you stab a knife in between your fingers at a fast paced hoping not to hit one of your digits.  Schroeder reached into the drawer to grab a butter knife and try this game out.  Thankfully, I was there to stop him.  I asked him if his fingers would grow back?  No.  I asked him if we wanted the experience of putting his finger on ice, going to the hospital, and having it sewn back on?  No.  I asked him what was required to play video games?  Fingers.

He has a plan for every big cardboard box delivered from Amazon.  Cardboard inspires endless hours of play.

He has yet to lose any of his tiny little baby teeth.

For his birthday, he asked for a sleepover (which didn't work out), goody bags for his friends, and a copy of "The Day the Crayons Quit".  Believe it or not, I've never done goodie bags for a kids party so this must have seemed like a big treat to him.  We invited a couple of his school friends over for the evening.  We had pizza and cupcakes and the boys played with all the little toys in their goody baskets.  On his actual birthday, we were headed to St. Louis, and I handed back his book.  All the big kids in the car shrieked with excitement.  I would say he is pretty easy to please.

His Grammy and Poppy took him for a night and out to McDonald's and shopping.  He came home the next day, and as we were taking a walk it began to sprinkle.  Schroeder turned to me and said, "I know about this rain."  He had watched the weather report with his Poppy, but the way he phrased it made me chuckle. 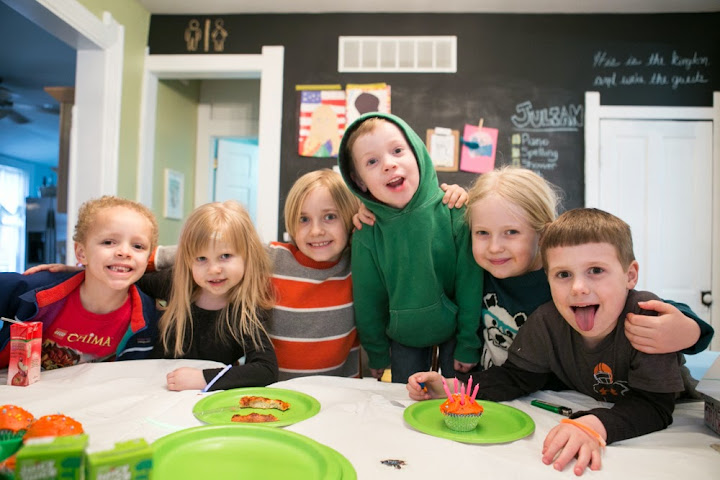 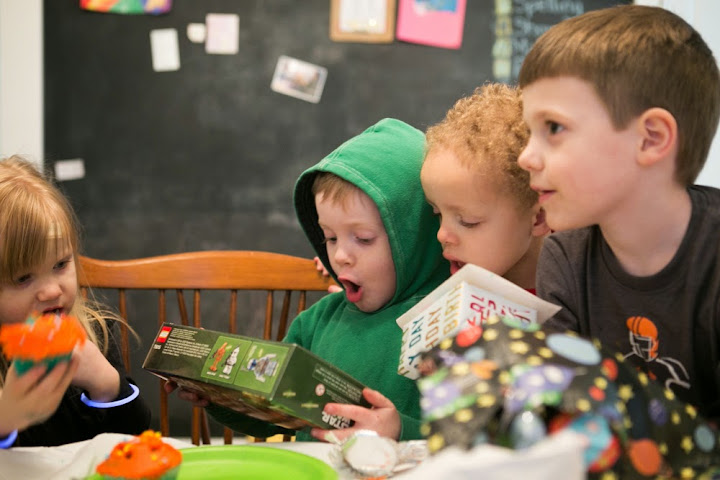