The third week of Advent began on Sunday, and at our church the children blessed us with a special presentation. The paraded down the main aisle handing out ornaments that reminded us of this week's theme, and then ended on stage singing We Three Kings. A CD and the congregation helped them out because We Three Kings is really not the most exciting of Christmas songs. D'arcy certainly doesn't know what a moor is... Here are some pictures I took on Sunday. D'arcy is standing with two of her favorite friends, Isabel and Catherine. Julian wasn't able to participate in the program since it was for age 3+ so he put on his own presentation, standing on his head. 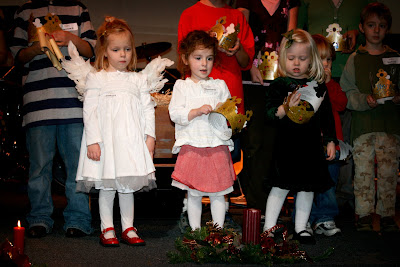 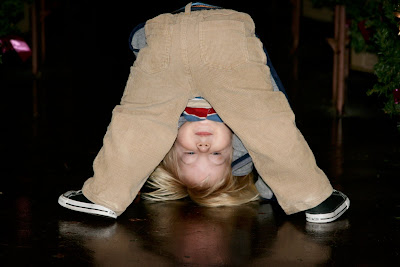 For the third week of Advent we focused on the Magi who came from far away to seek out the child who was born King of the Jews. We read Matthew 2:1-12.

After Jesus was born in Bethlehem in Judea, during the time of King Herod, Magi from the east came to Jerusalem
and asked, "Where is the one who has been born king of the Jews? We saw his star in the east and have come to worship him." When King Herod heard this he was disturbed, and all Jerusalem with him. When he had called together all the people's chief priests and teachers of the law, he asked them where the Christ was to be born. "In Bethlehem in Judea," they replied, "for this is what the prophet has written: "'But you, Bethlehem, in the land of Judah, are by no means least among the rulers of Judah; for out of you will come a ruler who will be the shepherd of my people Israel.'" Then Herod called the Magi secretly and found out from them the exact time the star had appeared. He sent them to Bethlehem and said, "Go and make a careful search for the child. As soon as you find him, report to me, so that I too may go and worship him." After they had heard the king, they went on their way, and the star they had seen in the east went ahead of them until it stopped over the place where the child was. When they saw the star, they were overjoyed. On coming to the house, they saw the child with his mother Mary, and they bowed down and worshiped him. Then they opened their treasures and presented him with gifts of gold and of incense and of myrrh. And having been warned in a dream not to go back to Herod, they returned to their country by another route.

And we sing We Three Kings (although if you notice in the scripture there isn't a reference to the number of Kings :) )

We three kings of Orient are
Bearing gifts we traverse afar
Field and fountain, moor and mountain
Following yonder star

Born a King on Bethlehem's plain
Gold I bring to crown Him again
King forever, ceasing never
Over us all to rein

Frankincense to offer have I
Incense owns a Deity nigh
Pray'r and praising, all men raising
Worship Him, God most high

Myrrh is mine, its bitter perfume
Breathes of life of gathering gloom
Sorrowing, sighing, bleeding, dying
Sealed in the stone-cold tomb